New apprentices a win for Queensland

The next generation of electricity industry tradespeople have hit the ground running at Ergon Energy and Energex training centres across Queensland, starting to learn the skills which will build and maintain the state’s energy networks for decades to come. 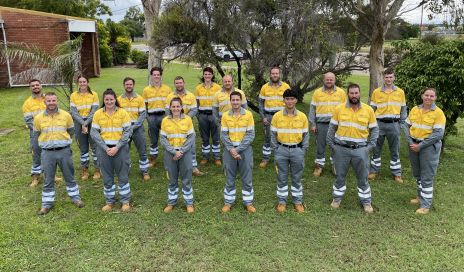 Rod Duke, Chief Executive of Ergon and Energex parent company Energy Queensland, said the 2021 intake represented another major investment in building skills, resilience and opportunity for communities across the state.

“At a time when local skills and know-how have never been more important, it’s been fantastic to see the enthusiasm and quality of candidates who are keen to come on board,” he said.

“Our new starters really stood out during the recruitment process in terms of their technical aptitude, how they value safety, and in their genuine desire to contribute to their communities. Our 88 new apprentices join over 400 existing apprentices across Ergon and Energex who are at various stages of their training, and this homegrown pipeline of talent is really standing our customers in good stead for many years to come.” The class of 2021 is a diverse mix of school leavers and mature-age starters drawn from communities right across the state.

They include nine former defence force personnel who are retraining for new civilian careers, several people who found themselves displaced from existing apprenticeships when their former training employer ceased operations, and one-third of the newest recruits are women, a significantly increased proportion compared to previous years.

After completing their initial training, they’re heading off to begin their field careers as apprentice distribution linespersons, electrotechnology electricians, or underground cable jointers.

Ergon Energy and Energex will begin recruiting their 2022 apprentice intake from July/August this year.