After 272 dog-related incidents affecting Queensland electricity meter readers in less than two years, Ergon Energy is appealing to dog owners to do their bit to keep their communities safe. Executive General Manager Customer Michael Dart said some shocking injuries had been caused by family pets that had escaped their restraints, jumped fences, busted down doors, or even been deliberately released after meter readers entered properties.

“If you walked a mile in a meter reader’s shoes you would understand the importance of people taking responsibility for their pets.

“Dog attacks can leave lasting physical and emotional scars and we need your help to prevent serious injuries to our people and others simply going about their business in the community.

“We understand that in most cases dog owners care deeply for their animals and take full responsibility for them, but if some dog owners had shown a bit more care and taken precautions these traumatic incidents could have been prevented,” Mr Dart said.

Since February, 11 Queensland meter readers have required medical treatment after being bitten by dogs, including two in Townsville and Rockhampton.

“The leading cause of the most recent injuries was dogs escaping confinement. We’ve had a case where a dog charged at a door with such force it broke off its hinges and we’ve seen plenty of examples of dogs being able to jump fences or dig their way under palings. 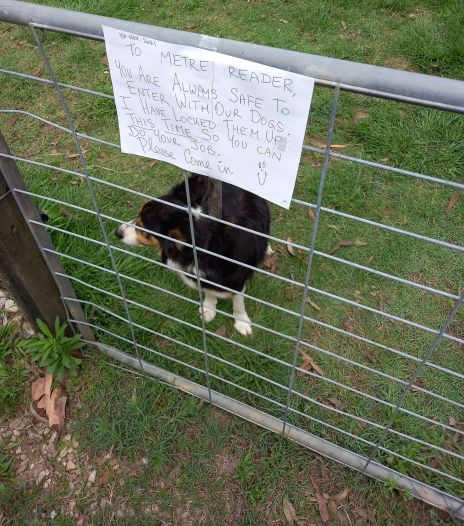 “As a dog owner, you need to consider the safety of everyone in your community and ensure your pet can’t escape and roam the neighbourhood.

“Even if you think your dog wouldn’t hurt a fly, you can’t predict how it will react in the company of strangers, especially when it’s territorial.

Ergon’s safe entry procedures, coupled with the ongoing rollout of digital meters, have contributed to a 30% reduction in injuries.

Mr Dart said while the implementation of these hazard reduction measures had made a considerable difference, escaped and roaming dogs were beyond Ergon’s control.

“We recognise that community safety is a team effort and we are committed to working together with Councils and our customers to reduce the risk of injuries from dog attacks for everyone’s sake.

“If our meter readers and field crews cannot see that your dog is suitably restrained or separated from the work area, they cannot safely enter your property.

“If you’re not comfortable restraining your dog or there’s no way to secure your dog where it will be visible to our meter readers, you can always register for online self-meter reads to avoid estimated bills.

“You can also use our 24/7 Customer Self Service portal to update your details if you buy a new dog or there are no longer any dogs at your property.

“It’s important that our meter readers are made aware if there are any dogs on site because in 15% of incidents the problem was inaccurate or non-existent dog details for the property,” Mr Dart said.

The primary causes of the 272 dog-related incidents since January 2020 were as follows: