A spike in vehicles vs power network sparks Ergon warning

According to Area Manager Chris Graham, in the past twelve months Ergon and Energex crews have been called to nearly 90 incidents involving vehicles striking the pillar boxes and exposing electrical hazards.

“Across Queensland, last year our crews responded to 52 vehicles hitting our underground network pillar boxes which we thought was a high number, but recently compiled data alarmingly showed a 67 per cent increase at 87 incidents,” Mr Graham said.

“These are the small green pillar boxes many Queenslanders with underground power will see on their front property boundary - they house electrical equipment supplying power to your home.

“If a vehicle hits a pillar box or other electrical equipment such as padmount transformers or powerpoles, even at low speed, live parts can be exposed, causing a dangerous safety issue capable of making the car live or severely injuring or killing anyone who comes in contact with it.

“We’re asking drivers to be well aware of their surroundings, especially our pillar boxes and other electrical assets.” 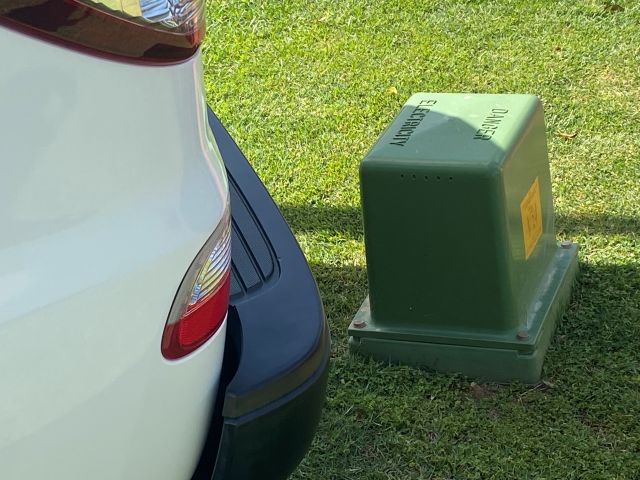 Mr Graham said if the worst happens and you drive into a pillar box there are a few crucial steps to remain safe.

“If someone in a vehicle accidentally bumps into one of our pillar boxes they should stay in their vehicle and, if safe to do so, drive it at least 10 metres away before getting out of the car and calling us on 13 16 70,” he said.

“If the vehicle is stuck on the pillar box there’s a high probability the outside of the vehicle may be live with electricity, so the safest course of action is to STAY, CALL and WAIT.

“Stay in the vehicle, call 000 for help and wait in the vehicle until emergency services and Energex/Ergon confirm it is safe to get out.

“In this situation, we urge bystanders outside the vehicle to keep well away.

“In a worst-case scenario, if the occupants must leave the vehicle due to fire or another life-threatening issue, the safest thing to do is open the door as wide as possible and jump, landing with both feet together – being very careful not to touch the car and ground at the same time and continue to jump with both feet together, or shuffle if unable to jump, until at least 10 metres away.”